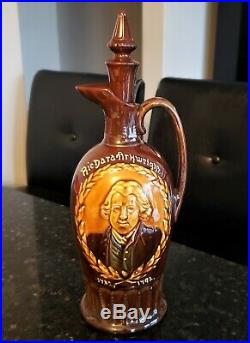 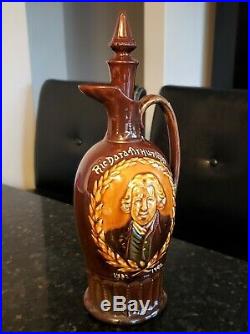 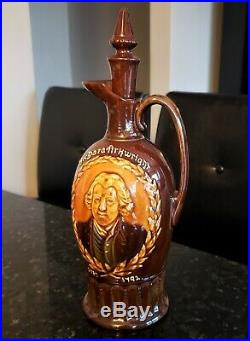 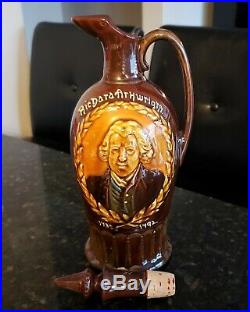 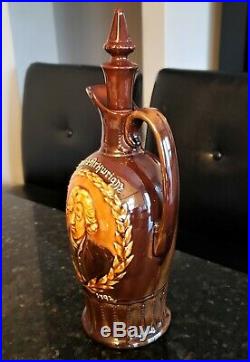 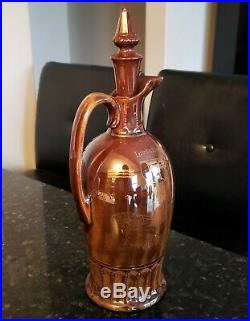 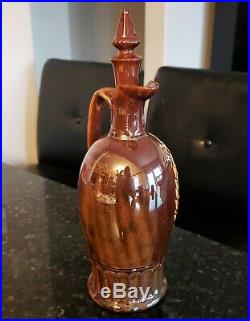 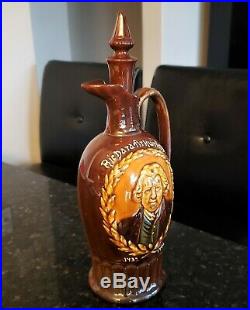 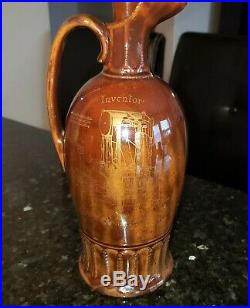 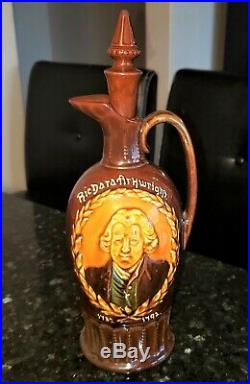 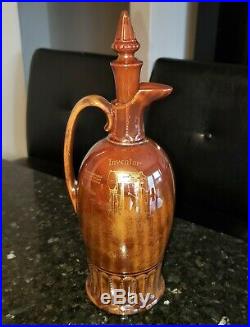 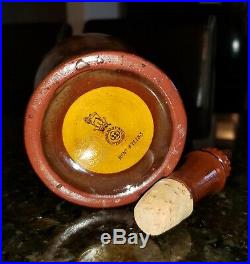 Many More Photo’s Scroll Down! THIS RICHARD ARKWRIGHT WHISKY FLASK MEASURES 9 INCHES TALL IT COMES WITH THE ORIGINAL TALL POTTERY STOPPER AND DATES FROM 1906. THIS JUG HAS THE THICK LUSTROUS TREACLE GLAZE DEFINING KINGSWARE BROWN COLOR. A DECORATION OF RICHARDS ARKWRIGHT INVENTOR OF THE SPINNING FRAME ON THE BACK OF THE JUG. A PICTORIAL GOLD TRANSFER OF A SPINNING FRAME AND READS INVENTOR OF THE SPINNING FRAME. STAMPED ON THE BOTTOM ON THE JUG ROYAL DOULTON ENGLAND WITH THE LION OVER CROWN ROYAL DOULTON MARK RD. 471183 AND MARKED WITH DEWARS WHITE LABEL WHISKY IN GOLD LETTERING. About 80% of These Richard Arkwright Whisky Decanters Do Not Have The Original Stoppers. Being Made of Pottery They Tend to Break Easily. Please see all the scans, photo’s and ask any questions. What you see is what you get. Postal Rates in Canada Has Increased This Year Along With The United States. Archaeologist Coins Clicks Here! Archaeologist Cards Clink Here! Please View All Photo’s Because They Are Part of The Description! José Roberto Briguenti Whisky Collection. Richard Arkwright Inventor of The Spinning Frame. Sir Richard Arkwright (23 December 1732 3 August 1792) was an English inventor and a leading entrepreneur during the early Industrial Revolution. He is credited as the driving force behind the development of the spinning frame, known as the water frame after it was adapted to use water power; and he patented a rotary carding engine to convert raw cotton to “cotton lap” prior to spinning. He was the first to develop factories housing both mechanised carding and spinning operations. Arkwright’s achievement was to combine power, machinery, semi-skilled labour and the new raw material of cotton to create mass-produced yarn. His organizational skills earned him the accolade “father of the modern industrial factory system, ” notably through the methods developed in his mill at Cromford, Derbyshire (now preserved as part of the Derwent Valley Mills World Heritage Site). In 1760 England, yarn production from wool, flax and cotton was still a cottage industry in which fibres were carded and spun by hand using a spinning wheel. As the textile industry expanded its markets and adopted faster machines, yarn supplies became scarce especially due to innovations such as the doubling of the loom speed after the invention of the flying shuttle. High demand for yarn spurred invention of the spinning jenny in 1764, followed closely by the invention of the spinning frame, later developed into the water frame (patented in 1769). Mechanisms had increased production of yarn so dramatically that by 1830 the yarn cottage industry in England could no longer compete and all spinning was carried out in factories. Richard Arkwright employed John Kay to produce a new spinning machine that Kay had worked on with (or possibly stolen from) another inventor called Thomas Highs. With the help of other local craftsmen the team produced the spinning frame, which produced a stronger thread than the spinning jenny produced by James Hargreaves. The frame employed the draw rollers invented by Lewis Paul to stretch, or attenuate, the yarn. The roller spinning process starts with a thick’string’ of loose fibres called a roving, which is passed between three pairs of rollers, each pair rotating slightly faster than the previous one. In this way it is reduced in thickness and increased in length before a strengthening twist is added by a bobbin-and-flyer mechanism. The spacing of the rollers has to be slightly greater than the fiber length to prevent breakage. The nip of the roller pairs prevents the twist from backing up to the roving. Too large to be operated by hand, the spinning frame needed a new source of power. Arkwright at first experimented with horses, but decided to employ the power of the water wheel, which gave the invention the name’water frame’. For some time, the stronger yarn produced by the spinning frame was used in looms for the lengthwise “warp” threads that bound cloth together, while hand powered jennies provided the weaker yarn used for the horizontal filler “weft” threads. The jennies required skill but were inexpensive and could be used in a home. The spinning frames required significant capital but little skill. This image was provided by Blackburn with Darwen Borough Council for use in the Cotton Town digitisation project. In 1769, a wig maker and perrucier, Richard Arkwright, had observed that, even with these improvements, the hand loom weavers could not keep up with the demand for cloth. He therefore set out to design and produce a much larger spinning machine that would be able to cope with the increased demand. His design became known as the water frame. It was given this name because it needed energy from a watermill to power it. It was therefore too large for cottage work and, consequently, had to be placed in a large building known as a factory. This meant that, for the first time, a family involved in the production of woven cloth were now split up. The women of the family, whom, you will remember, were the traditional spinners, now had to leave their cottages and work in a large building where the water frames had been installed. Since these factories used water as their power source, they tended to be built in areas where a good supply of fast flowing water was available. These early water powered factories, because they looked like large watermills, became known as mills. They were mainly concentrated in the mountainous areas of Britain where water was plentiful. For the first time men and women were separated in their work. The man stayed at home to produce the weaving and the women left home each day to work in the factory, producing the yarn for their menfolk to weave into cloth. The item “Royal Doulton Kingsware Richard Arkwright Dewar Whisky White Label Flask Jug” is in sale since Friday, January 10, 2020. This item is in the category “Collectibles\Advertising\Food & Beverage\Distillery\Merchandise & Memorabilia\Bottles, Decanters & Jugs”. The seller is “industrial.archaeologist” and is located in Oakville, Ontario. This item can be shipped worldwide.