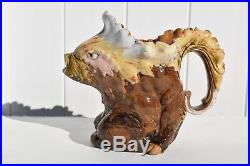 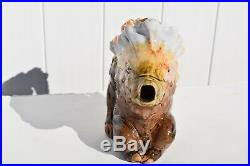 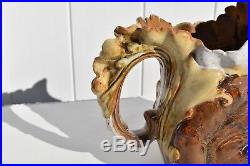 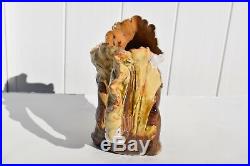 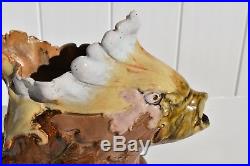 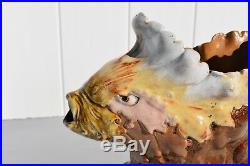 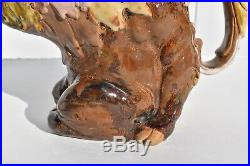 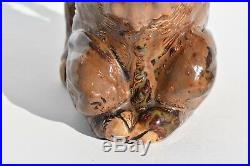 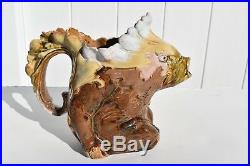 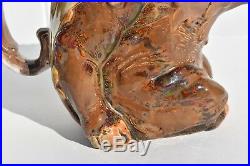 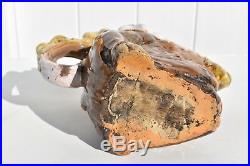 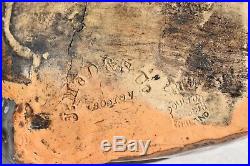 A RARE ANTIQUE DOULTON LAMBETH ART POTTERY SALT-GLAZED STONEWARE JUG OR WATER PITCHER IN THE FORM OF A FANTASTIC GROTESQUE FISH WITH HUMAN BODY, HOOVES FEET. IT IS IN EXCELLENT CONDITION, NO CRACKS, CHIPS OR ANY DAMAGE SEEN. AFTER A LONG SEARCH ON THE INTERNET THE ONLY OTHER ONE I CAN FOUND IS IN THE VICTORIA AND ALBERT MUSEUM IN LONDON. THIS JUG WAS MODELLED BY MARK V. MARSHALL, MADE BY DOULTON & CO. LAMBETH ART POTTERY, LONDON, ENGLAND IN ABOUT 1885 AND THIS ONE IS VERY SPECIAL BECAUSE IT WAS CUSTOM MADE FOR THE AMERICAN MARKET, A STORE IN BOSTON. MAKER’S MARK AND BOSTON STORE INCISED ON BASE, J. MOD & S CO. IN BOSTON” “DOULTON LAMBETH ENGLAND. MEASURES APPROX: 9″ TALL X 11″ L X 4 7/8 W. BIO OF MARK V MARSHALL. Mark Marshall like George Tinworth, trained at the Lambeth School of Art. After training at Lambeth he moved on to work at a local masons yard. During this period he also helped at the Martin Brothers pottery until 1874, when he joined Royal Doulton. Mark Marshalls work is some of the boldest and most exuberant ever produced at the Doulton Art Pottery. Many of his pieces undoubtedly owe much to the Martin brothers, with grotesque and fanciful animals modeled in high relief and hiding among scrolling foliage. His time at Martin Brothers includes an impressive stoneware vase lavishly modeled with a scaly creature winding around the vase. Its offspring cowering under the usual scrolling foliage. Mark Marshall continued with his own work too. His pottery reliefs of Biblical scenes were exhibited at the Royal Academy and were particularly well received. His work was admired by John Ruskin. As a major influence in the Royal Doulton world in the late 1800s and early 1900s, Marshall designed and manufactured a wide range of grotesque figures in all sorts of scenes. During his time at Doulton, Mark Marshall worked closely with William Rix the manager of Doultons art department, on the Doulton Marqueterie range which features Marks stylish and popular reptilian decorations. Mark Marshall was born to Elizabeth Susanna Valsler in August 1842. His father was Frederick Marshall and they married in June 1841 at St Nicholass Church, Rochester, Kent. Marks mother Elizabeth died at just 39 years old in January 1858. Mark had four brothers and sisters. His father then married a younger woman who was only ten years Marks senior. Mark then acquired an additional four brothers. Unfortunately only one of these survived to maturity, which was fairly common in Victorian times. Mark married Helen Relf in 1864, one of the many Relf sisters that the Marshall brothers married. Mark Marshall was the son of a stonemason and Marks occupation is detailed as a sculptor in the 1881 census. Despite his earlier connection with Martin Brothers he fell out with them in later life. FOOTNOTE: FROM ANTIQUE MARKS. I will not be responsible for any lost, damaged, or stolen items in transition to international countries. I will do my best answer any question(s) you may have. FOR 7 DAYS ONLY……… ITEM MUST BE IN SAME CONDITION AS IN PHOTOS OF LISTING AND COMPLETE…… WE WILL BE HAPPY TO ASSIST YOU IN ADDRESSING THE MATTER WITH THE SHIPPER. YOUR 100% SATISFACTION ARE IMPORTANT TO US IF YOU ARE NOT HAPPY FOR ANY REASON TO PLEASE TO CONTRACT US. SO THAT WE CAN. WORK IT OUT BEFORE LEAVING FEEDBACK. FOR SAFETY IN TRANSIT SOME PARTS MAY BE DISMOUNTED. Except as expressly set forth in the item description. The item “SUPER RARE ANTIQUE DOULTON LAMBETH ART POTTERY FANTASTIC GROTESQUE FISH JUG” is in sale since Thursday, February 14, 2019. This item is in the category “Pottery & Glass\Pottery & China\China & Dinnerware\Royal Doulton”. The seller is “eastandwestsweet” and is located in Killingworth, Connecticut. This item can be shipped worldwide.