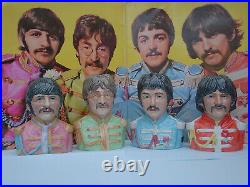 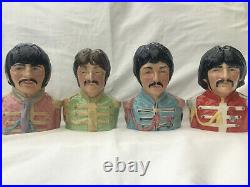 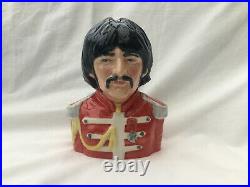 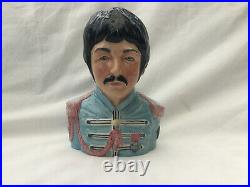 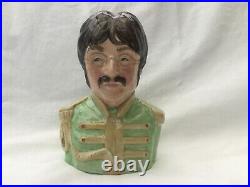 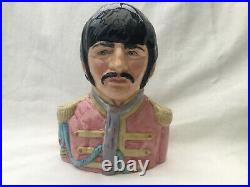 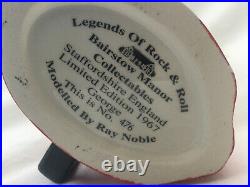 This set comes in the original colourway as per the Sgt Pepper LP inner album. First produced in about 1996. ONCE AGAIN ANOTHER OUSTANDING MASTERPIECE, SCULPURED BY THE FAMOUS RAY NOBLE, ORIGINALLY COMMISSIONED BY DAVE TOMLIN AND PRODUCED BY BAIRSTOW MANOR COLLECTABLES STOKE-ON-TRENT STAFFORDSHIRE ENGLAND. THESE JUGS ARE INDIVIDUALLY HAND CRAFTED AND HAND PAINTED. STANDING APPOXIMATELY 6 INCHES TALL WITH ITS IDENTIFICATION NUMBER MAKING UP PART OF ITS BACK STAMP. WHETHER A TOBY JUG COLLECTOR OR BEATLES/POP FAN, THIS IS A MUST MUST HAVE SET OF THE BEST TOBY JUGS. THE MAIN PICTURE WITH THE ALBUM BACK DROP IS A TEMPLETE. The Beatles were an English rock band formed in Liverpool in 1960. With a line-up comprising of John Lennon, Paul Macartney George Harrison, and Ringo Starr, they are regarded as. The most influential band of all time. The group were integral to the evolution of pop music into an art form and to the development of the. Counterculture of the 1960s. Their sound, rooted in skiffle beat. And 1950s rock and roll. Incorporated elements of classical music. They also pioneered recording techniques. And explored music styles ranging from ballards. As they continued to draw influences from a variety of cultural sources, their musical and lyrical sophistication grew, and they came to be seen as embodying the era’s socio-cultural movements. Led by the band’s primary songwriters, Lennon and Mcartney. The Beatles built their reputation playing clubs in Liverpool and Hamberg. Over a three-year period from 1960, initially with Stuart Sutcliff. The core trio of Lennon, McCartney and Harrison, who had been together since 1958, went through a succession of drummers, including Pete Best. Before asking Starr to join them in 1962. Moulded them into a professional act, and producer George Martin. Guided and developed their recordings, greatly expanding their domestic success after their first hit, “Love Me Do”. As their popularity grew into the intense fan frenzy dubbed “Beatlemania”. The band acquired the nickname “the Fab Four”, with Epstein, Martin and other members of the band’s entourage sometimes given the informal title of “fith Beatle”. The Beatles were international stars by early 1964, leading the “British Invasion”. Of the United States pop market and breaking numerous sales records. They soon made their film debut with a Hard Days Night (1964). From 1965 onwards, they produced increasingly innovative recordings, including the albums Rubber Soul. (1966) and Sgt Peppers Lonely Heart Club Band. (1967), and enjoyed further commercial success with The Beatles (also known as the “White Album”, 1968) and Abbey Road (1969). In 1968, they founded Apple Corps a multi-armed multimedia corporation that continues to oversee projects related to the band’s legacy. After the groups break-up in 1970, all four members enjoyed success as solo artists. Lennon was shot and killed in December 1980, and Harrison died of lung cancer in November 2001. McCartney and Starr remain musically active. Details to follow in a short while. The item “Toby jugs. The Beatles. Sgt Pepper. Music. LP. Vinyl. CD. Not Figures” is in sale since Friday, November 20, 2020. This item is in the category “Pottery, Porcelain & Glass\Porcelain/China\Royal Doulton\Character/Toby Jugs”. The seller is “davestobyjugs” and is located in Milton Keynes. This item can be shipped worldwide.