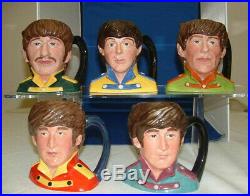 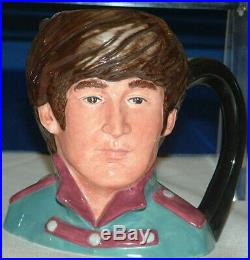 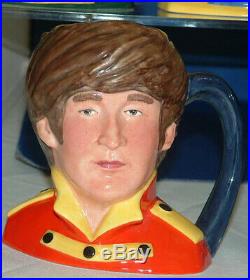 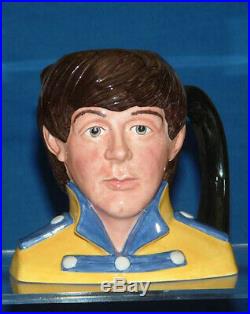 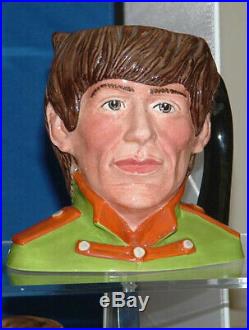 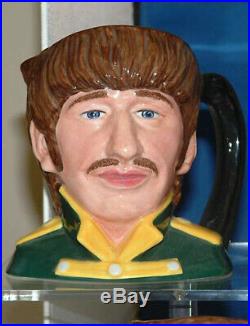 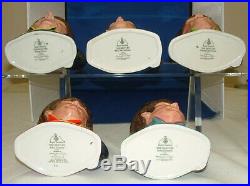 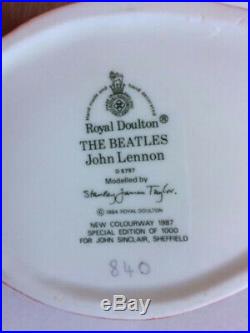 Fourteen years after the Fab Four disbanded, Royal. Doulton designer Stanley Taylor created the Beatles. Character Jug Series, a tribute to the Group who. Had so influenced an entire generation of youth. These five amazing Beatles Character Jugs are. Museum Quality, in PRISTINE condition. And wrote songs for the Beatles until the group. With his wife, Yoko Ono. Lennon pursued a successful solo career. Until his tragic assassination in 1980. 1942 was a singer, songwriter. And the bass player with the Beatles until they. He then performed with. His own band, Wings, until 1981, and since. Then has remained active in the music. This Jug was issued only in. Wrote songs for the Beatles. Upon the Group’s. Breakup, Harrison pursued a successful solo. Career until his death in 2001. Richard Starkey aka: Ringo Starr b. Drummer for the Beatles until they disbanded in. After the breakup, Ringo has pursued. A successful solo career in music and film. John Lennon (variation 1 / D6725). Issued with the original Production Run. John Lennon (variation 2 / D6797). Issued with a backstamp of Doulton/. John Sinclair who commissioned a. Special edition of 1000 in 1987, the. Only year they were made. Note: Although some of the Lennon Var. Pictures in this listing show both. In this grouping is No. A fabulous gift for the ” Fab Four Fans “. In your life, even if it happens to be you. Item: BEATLES CHARACTER JUGS. Issued By: Royal Doulton. Designer: Stanley James Taylor. Doulton Number: Paul McCartney D6724. Doulton Number: John Lennon D6725 Var. Doulton Number: John Lennon D6797 Var. 2 is limited to 1000 pieces / This in No. Doulton Number: Ringo Starr D6726. Doulton Number: George Harrison D6727. Handle: Plain Black (applies to production run). Handle: Plain Blue applies to Lennon Var. Issued: 1984 Withdrawn: 1991 – Production Run. Issued: 1987 (1 yr only) – Lennon Var. Size: Medium (applies to full set). Height: 5½ / 14.0 cm. Condition: MUSEUM QUALITY / Like New! NO Chips, NO Cracks, NO Crazing, NO Restoration. From My Personal Collection. Photos are of the ACTUAL Character Jugs. Unless otherwise noted, all white spots on photos are. Reflections from camera flash and overhead lighting. Certified & Guaranteed Original by GreatDeals, Ltd. This item has been listed for sale on other sites. Therefore, if you like it. Before it’s gone! GreatDeals is not responsible for service transit. Transit times are provided by the carrier. Exclude weekends & holidays, and may vary. With package origin and destination. Particularly during peak periods. If an item arrives damaged, save the item and. Claim can be filed. If you do not save. The item “Royal Doulton BEATLES CHARACTER JUGS / Production Run + 1 / 1980s Museum Quality” is in sale since Thursday, June 27, 2019. This item is in the category “Collectibles\Decorative Collectibles\Decorative Collectible Brands\Royal Doulton\Character, Toby Jugs”. The seller is “gateman*john” and is located in Gurnee, Illinois. This item can be shipped worldwide.