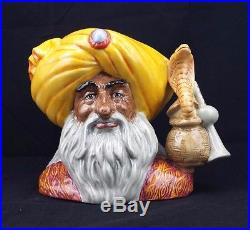 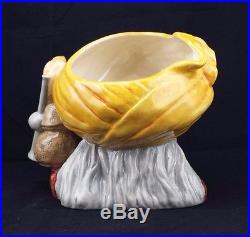 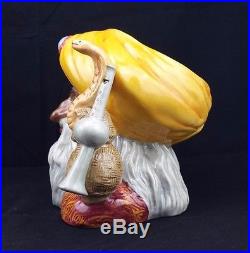 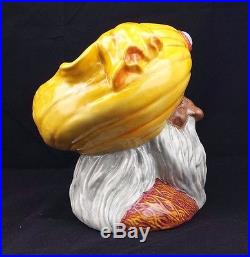 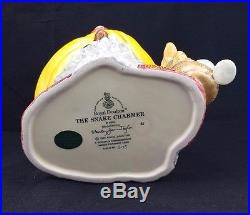 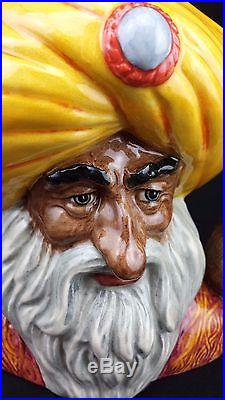 Royal Doulton Toby Jug: The Snake Charmer #D6912. “This limited edition Toby Jug is only 505/2500 and would make a “charming addition to your collection! Character: The Snake Charmer. Character Origin: Snake charming is the practice of pretending to hypnotize a snake by playing an instrument known as a pungi or bansuri. Many snake charmers live a wandering existence visiting towns on market days or during festivals. Snake charming is currently in danger of dying out due to a law passed in 1972 in India banning the ownership of snakes. Designer: Stanley James Taylor. A Specially Commissioned Limited Edition of 2,500. A sticker from Clemons-Eicken Fine European Imports The Borgata of Scottsdale. Features: All Toby Jugs are hand-painted. Even when coming from the same mold, their individual appearance can vary drastically. This particular Snake Charmer dons a yellow turban tagged with a sapphire jewel framed in pink. His robes are burgundy and yellow and he has a very detailed grey beard. The elaborate handle features the charmer’s snake basket attached at his shoulder with the pungi (instrument) resting against the basket. A snake is precariously staring off into space and seems to have been “charmed” with the right side of it’s hood attached to the charmer’s turban. The limited one-year release of this Jug in 1992 ad is #505 of #2500. 9.9/10: No chips, cracks or crazing. Glaze is in excellent condition. Please see pictures for full condition assessment. Brief History Surrounding Royal Doulton and the Toby Jug. Charles Noke of Royal Doulton introduced the first modern Character Jug, a derivative of the Toby Jug in 1934. The character was John Barleycorn, a figure that symbolized whiskey. After it’s success, character jugs were modeled after famous historical and fictional people, (as well as generic trades and professions) a trend that continues today. The first non-fiction character was designed by Royal Doulton’s Harry Fenton in the likeness of John Peel, a British Master of Foxhounds in the early 1800s. Royal Doulton’s production in Toby Jugs seized in 2011, making them much more sought after among collectors. We take pride in everything we sell and pack all of our items to the best of our abilities to ensure safe arrival. Please notify us with any issues so that we can resolve them as soon as possible as customer service is our number one priority. Everything will come to you as we would want it to come to us. Please note that most of these items are acquired through estate sales and as thorough as we are in checking them over, we may miss a nick or a scratch. Any defects we find will be mentioned in the listing. All electronics have been tested thoroughly. The item “Royal Doulton Retired 7 The Snake Charmer 505/2500 Toby Jug D6912 (1992)” is in sale since Friday, February 19, 2016. This item is in the category “Collectibles\Decorative Collectibles\Decorative Collectible Brands\Royal Doulton\Character, Toby Jugs”. The seller is “ke.aren” and is located in Glendale, Arizona. This item can be shipped to United States, all countries in Europe, Canada, Brazil, Australia.